The Highland Golf Club started back in 1930. Money was scarce because of the depression, so people did what they could to make their lives enjoyable. Movies were hot, parlor games and board games were popular and a game that not everyone knew about was beginning to involve “golf”. 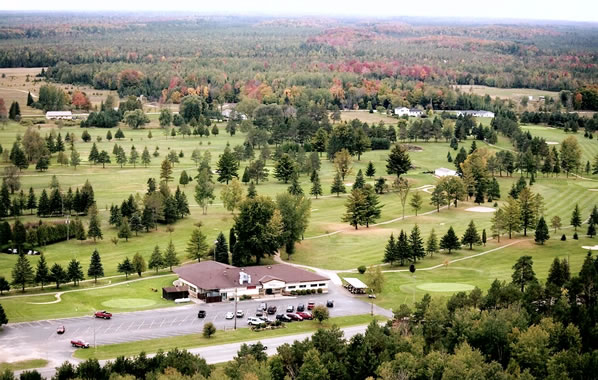 The Highland Golf Club clubhouse started out as an old wooden and stone barn in 1930 with a nine-hole golf course. The golf course was a little different then the golf course we now play. The biggest difference was that the greens were made of sand. The proper way to play the sand greens was as followed: When a golfer reached the sand green a rake was used to smooth a path from the ball to the hole. When the putt was eventually made the golfer would then use a toothed rake to groom the sand green for the next group (making sure to rake his foot prints) . Sand greens were cheaper then your traditional greens and over time the Highland Golf Club did replace them with grass and to this day have one of the nicest greens in the area.

In 1933 the original clubhouse burnt down and was rebuilt the following spring. It was becoming a very popular site for entertainment and golf when fire hit once again in 1960. The members once again picked up their hammers and nails and rebuilt the clubhouse in 1961.
After the second fire the members decided to make plans for an additional nine holes and expand to a full 18 -hole golf course. The purchase of additional land was acted upon and the club doubled in real estate in just a few years. Irrigation work was done on the original nine holes and work was staring on the new nine. The golf course was to open in the early summer of 1968 but because of a usually wet summer that prevented proper grooming it was delayed until August.

On August 24th, 1968 the dream became a reality when Delta County’s first 18-hole golf course opened. It still had some minor work to be completed but the golfers from all over the U.P. were coming to Highland Golf Club to see the impressive layout.

The Highland Golf was now becoming a popular golf spot. It was holding large tournaments and was on a rotation for the Men’s Upper Peninsula Golf Association tournament. Every thing was going along just fine until December 2, 1975 when fire once again destroyed the interior of the clubhouse. The members once again gathered their strength and resources and rebuilt the structure that you now see today.

It has been an eventful 80 years for the Highland Golf Club. The Club has seen many changes and the members have always been there to help out the club when it has needed it. The Highland Golf Club will always extend a warm welcome to our guests visiting us and we will keep the reputation of “The Friendliest Golf Course in the Area.